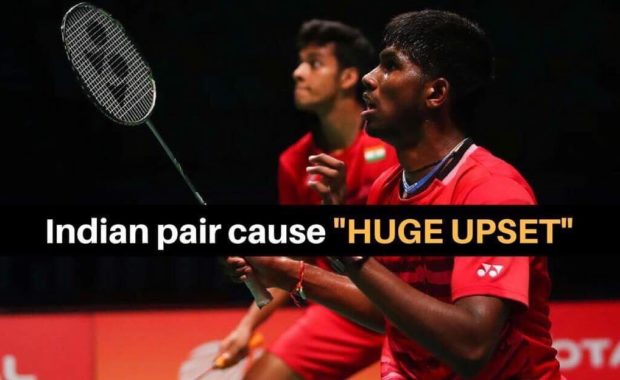 Satwik Sairaj and chirag Shetty continue their giantkilling run and enter the semis of the China Open Super750 after defeating the world no. 3 ranked pair of Li Junhui and Liu Yuchen 21-19, 21-15.

In the China Open quarter-finals, the first game remained neck and neck till the first eight points. The Indian pair however took a slender 15-13 advantage in the first game before winning it at 21-19.

The second game was closely fought contest till the first 12 points before Chirag Shetty-Satwik Rankireddy upped their tempo.

At 12-12, Satwik-Chirag won three straight points to make it 15-12. What was working for the Indians was how they were not giving away any easy angles to Li-Liu to work with and kept their flat strokes extremely tight. Chirag was absolutely brilliant at the net, playing extremely tight and spinning net shots to make it harder for the Chinese pair.

From that point on, the Chinese pair could just grab three points while Satwik-Chirag’s intelligent gameplay paid dividends as they took the match with a 21-15 win in the second game.

Indian pair all set to enter top 8 next week

India pair is all set to enter top 8 of world ranking after this win. They will be rank 7 in world after next week Ranking.

While India ended 2019 with several hits and misses as a sporting nation, there is a lot to look forward to at the start of the new decade in 2020. 2020 is an Olympics year and the whole world will be eying on the biggest sports event of world from 2…

Summer Olympics 2020 is scheduled to take place from 24 July to 9 August in Tokyo, Japan. Indians had won only 2 medals in the previous edition of Summer Olympics. India are very desperate to improve the medal tally in Tokyo. So far Indians athletes …